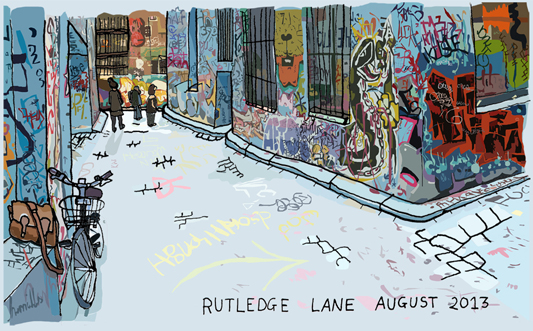 I've recently started a new series of prints depicting the well loved rainbow coloured streets of Melbourne. Waiting for a friend in a trendy chocolate cafe I picked up a copy of the newspaper and began idly flicking through, when a huge ghostly image of the newly painted Rutledge Lane caught my eye. Coming from Bristol and having spent nearly a year in Melbourne now I've become somewhat desensitised to the art of the streets, and a little bored of the old 'is it art or mindless vandalism?' debate. But the new work by Adrian Doyle, entitled 'Empty Nursery Blue' really tries something different, and from the moment I saw the photograph I was itching to hop on the Metro and see it for myself.

Anyone who has been to Melbourne will know that the laneways are their own little worlds: kooky side steps from the tooting main streets. Empty Nursery Blue is like that but on steroids. It makes Hosier Lane look mainstream. This windy little laneway had been completely drenched in an ethereal blue, not a comforting kind like a well-loved blanket or your grandma's budgie, but an icy cold sort that takes you out of the heat of Melbourne and into some sinister snowy backalley somewhere in eastern Europe. It feels more like an installation from an art gallery than your average alleyway; I love that. 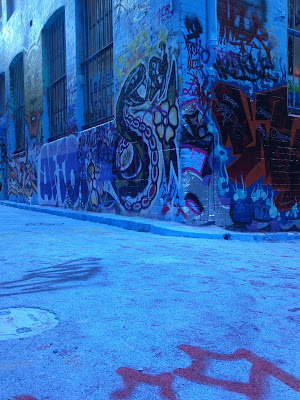 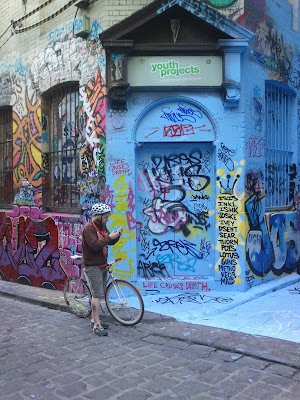 Rutledge (#nofilter) and Entrance to Rutledge from Hosier Lane

What interests me about this venture is not only the bold playfulness, but also how it will transform over time. Street art changes its curation overnight, it's in a constant state of flux, and so what was once the main exhibit will soon morph into a moody backdrop for the next team to move in on. Indeed, even whilst I tried to tentatively photograph the walls inbetween the groups of schoolchildren smoking on pale blue kerbs, at least four or five artists had begun work on the great oceanic canvas. And so it will go on.

Perhaps photography is the best way to capture street art, but in a world over saturated with square images in filters of Brannan and Rise, I felt compelled to document street art in a different way- as an artist. So I set to work. Every tag, every drop of paint, every wild eyed animal I painstakingly redrew, preserving the walls as they were on that day, like any aspiring Monet might try and recreate sunlight on a church or lilypads on a pond. By the time I had finished, the image was defunct, 'oh that's so last week', dated and at the bottom of the news feed. That's kind of what I love about the project. In our scrolling world it can be challenging to create something that's going to stick around and go on your wall (your real wall, not your Facebook one), especially since they have apps now that pretty much make you a photographer without having any clue about what an f stop might be. Street art is part of that ever-changing community, and I've really enjoyed trying to bring together the two worlds of art in some sort of wary friendship. 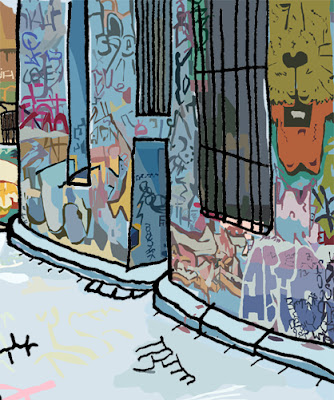 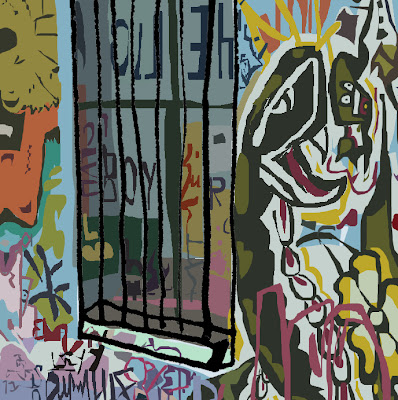 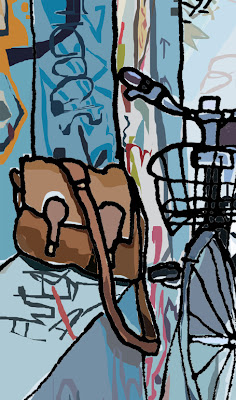 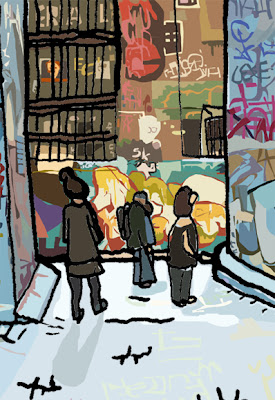 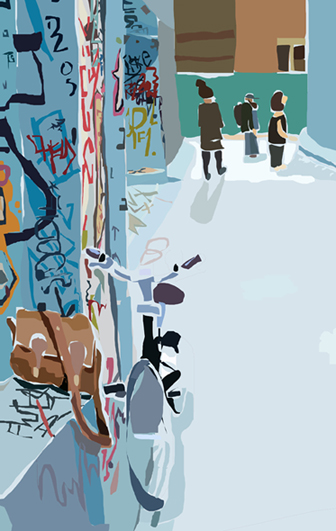 They say you should never show a work in progress, but they also say you should get to your bus stop ten minutes before your bus is due to arrive and tomato ketchup should be stored in the fridge. Here is a sneak preview of what I'm up to at the moment.
Posted by Holly at 13:29 1 comment:
Labels: Australia, Bike, Blue, Graffiti, Melbourne, Paint, Sketch, Street art
Newer Posts Older Posts Home
Subscribe to: Posts (Atom)